Closely associated with Nineteen Nocturne Boulevard and Julie Hoverson, is the Warp’d Space and Warp’d Stories productions by Kimberly Poole.

Kim has been acting since junior high school drama class and continued through high school. Later she worked with Julie as a voice actor, and expressed an interest in learning how to produce shows. Julie mentored Kim as Warp’d Space took shape.
She already knew plenty of actors from the podcasting community, and recruited some of her actors from her own family: Kim’s daughter plays Pilot in multiple voices. Local voices are recorded at Julie’s studio and the others send recordings from remote locations.
This can be tricky since remote recordings necessarily have a different audio environment, but Kim says she can pull it off since the expected audio ambience in spaceship scenes is controllable [my paraphrasing].


I’ve done a bit of audio myself, and have had to splice together remotely recorded dialogue, so I can sympathize with the challenges.
She would like to do more Warp’d Space, but getting the crew back together is no small undertaking.
Kim says she goes to Larp events monthly (I’ve really got to try that) which lets her combine acting and costuming and become a sociopath-assassin for a weekend. 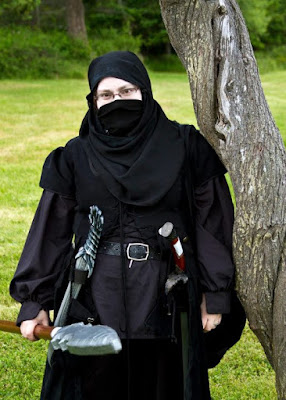