Everyone knows Star Trek. Everyone knows Star Wars. What about Honor Harrington?
No? Then you probably aren’t a science fiction BOOK fan. The Honor series by David Weber is only on paper at this time, but it’s so good that around 4500 fans belong to the official fan association: The Royal Manticoran Navy.

David Weber is a prolific writer and historian. His intricately crafted world of Honorverse spans 35 books, as listed on his website.
Enthusiasm for the series resulted in a fan organization based upon the structure of the fictional Star Kingdom of Manticore, complete with noble titles, military ranks, duties and positions.

We met with Joseph Harney and Theresa Hindle in Sacramento and got an introduction to the Royal Manticoran Navy. They are officers (Commodore and Captain, respectively) in the Tenth Fleet, which covers the western United States and part of Canada. There are fleets across North America, Europe, and Australia, with individual chapters in the fan association designated as ships, bivouacs, Assault Shuttles, and Light Attack Craft. To see a map of these, click here.
The organization takes applications from groups of six or more members to create a new chapter with a ship designation. There is also a branch for kids called the Sphinx Forestry Commission.

But what do they do? Well, by all accounts, they have fun. Oh, they also attend cool science fiction conventions. I met Joseph and Theresa quite by chance at the WizardCon in Sacramento a few months ago. Despite having read at least nine of the Honor Harrington novels, I was oblivious to the existence of a fan association. You can imagine my surprise when I saw uniformed officers in a booth for the Royal Manticoran Navy. The uniforms, by the way, look just like the ones on the book covers, and the club has a rank and award system which is also modeled upon the books’ space navy. Rank is earned by passing exams and awards (service ribbons and medals) also represent real achievements. These are not just costumes. 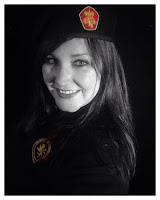 Another thing they do is support charities. Some chapters help to prevent homelessness, some collect toys-for-tots. The official TRMN charity is
Big Cat Rescue in Florida, the world’s largest accredited sanctuaries for exotic cats, and leading advocate for ending the abuse of captive big cats and saving wild cats from extinction. If you read the Honor Harrington books, you will quickly figure out why this charity makes sense for the fan association.

You might already be a fan, but don’t know if you would like to join TRMN. Well, I don’t know if you would either, but I can tell you that they are all sorts of people with one thing in common: they love the book series. From our chat with Joe and Theresa, I gather that many members also like the convention scene and cosplay. Many are interested in history, roll player games, and reenacting. Joseph Harney describes himself as a professional reenactor who has been active in Renfair, Dickens, and other events.

Did I mention that David Weber is an historian? The whole Honorverse history has solid parallels in the political, economic, and military history of Earth, and as the fictional decades pass in the novels, events unfold logically and naturally for societies, governments, and individual characters.

If you are not already a fan, I’ll just say this: The titular character is interesting enough to have 13 books about her adventures, spin-off series for young adults, anthologies, graphic novels, a series companion book, and a fan club of 4500 members. Other writers who have contributed to the Honorverse include: David Drake, S.M. Stirling, Roland Freen, Linda Evans, Jane Lindskold, Eric Flint, Timothy Zahn, and John Ringo.

David Weber’s website lists 35 published books related to Honorverse, and the Royal Manticoran Navy website lists some more which are available only to members.

If you are into science fiction, history, and adventure, maybe you should check the books, and the Royal Manticoran Navy.

Posted by James Prescott at 4:21 PM