Magic in our world

I just read the entire Tufa novel series by Alex Bledsoe in about a month.
Interestingly, I wasn’t looking for something to read, but rather some new songs to listen to. There are some excellent music videos on Youtube with a band called Tuatha Dea that I just couldn’t get enough of, but when I searched the titles of the songs it turns out that some of them are actually book titles.
Each book is centered on a fictional town in Tennessee called Needsville, and on a secluded community of…well…sort of human people.
If you don’t know the basic premise for the story, you won’t guess it until the end of the first book, and even then you must wait for each book to reveal more of the back-story in deliciously bite-size anticipation.
Much of it deals with very human relationships and not so human challenges. This story will appeal to readers of folklore and fantasy, as well as those who enjoy frank prose about the lustier side of life. I thoroughly enjoyed it.
The band, Tuatha Dea, is also from Tennessee and is truly a family affair:  Like the Tufa folks in the novels, the members of this band each have extraordinary talent and can play multiple instruments.
I spoke to Danny Mullikin (rhythm guitar, composer, and drums) and, to my surprise, he said that their experience in music began with a family drum circle not so many years ago. Only his son Brandon was already playing guitar at the beginning. 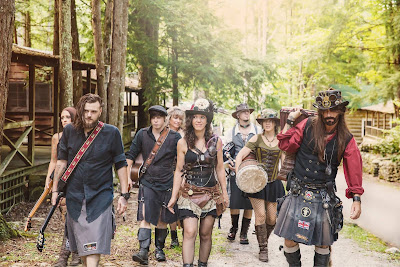 Danny’s wife, Rebecca Holman, delivers powerful vocals as does Rebecca’s sister Kathy. Danny’s daughter, Tesea Dawson played flute before the band formed, and now plays bass guitar and keyboard. Kathy’s fiancé Chris Bush  plays didgeridoo, native American flute, penny whistle, bagpipes and drums. Adam Ogle is on rhythm and lead guitar. Brett Maney has joined the tribe on drums. Laura Smith recently joined Tuatha Dea bringing her world class fiddle playing to the band.
The YouTube videos I’ve seen include the songs: Long Black Curl, Wisp of a Thing,
and,The Hum and the Shiver, which are all titles of Tufa novels. The videos are professional, outstanding works of art thanks to Jesse Jones. Also, you will want to see the Appalachia Burning video which recounts the terrible fire in 2016, which the band members experienced first hand, and the song was written in a hotel where they evacuated to. I especially recommend Ailein Duinn for some real Celtic music. Yeah, I’m a fan of Celtic music.
Tuatha Dea also participated in The Green Album, in association with Nightsong Recording Studios. This is a collaboration of many talented people and the Rainforest Trust to purchase millions of acres of rainforest for conservation.
You still have time to see Tuatha Dea’s final performance of 2018 at the Appalachian Masquerade Ball in Greer, South Carolina on October 26th.

Through email, Alex Bledsoe answered a few questions I’d been wondering about:

WTG: Can you tell me how you got to know Danny and the rest of the band?
Alex: I was attending the Pagan Unity Festival (PUF) outside Nashville, and they were the headlining band. I’d never heard of them before, but they blew me away. Later Danny and I realized that we’re the same age, we grew up twenty miles from each other although we never met, and we shared memories of many of the same places and events. I gave him a book and he gave me a CD, and then about two months later he called and asked if I’d mind if the band did some songs based on my Tufa novels. By then I’d become a hardcore fan, and of course I said yes.
WTG: Would you ever consider a sequel, prequel, or spinoff of the Tufa series? I think the story cannot continue without becoming a new story, but I’d like to tell my readers your thoughts on that.
Alex: That’s exactly right. I chose to end it where I did because I didn’t want to start repeating myself. We’ve all read series that have gone on way too long, far past the point where the author had anything new to say. I didn’t want to fall into that trap. I’m not ruling out ever returning the Tufa, but I’d have to have a substantially different (and good!) idea first.
WTG: I’m seeing a lot of different media; film, tv,  books, comics, live performance, and audio which all have fans, but it’s hard to see the big picture sometimes. What do you think of today’s trends in entertainment?
Alex: I see two competing and contradictory movements in all forms of media right now. One, there’s a long overdue push for representation, particularly in genres and forms previously dominated by white men. The other is a full-out war on original content, whether music, movies, TV or literature, driven by marketing. All the arts, not just music, need the equivalent of the punk revolution of the 70s, which takes the arts away from the corporations.
WTG: Are there any events or upcoming publications you would like people to know about?
Alex: I’ll be at the SE Wisconsin Festival of Books in Waukesha on November 3, discussing “Science Fiction, Fantasy, and Politics” with authors Patrick Tomlinson and James Lowder, and at the Stoughton Public Library on November 11 with Katherine Addison (aka Sarah Monette) and Steve Fortney.

Alex has written other series as well and all can be found on Amazon. The music of Tuatha Dea is also on Amazon as well as their website, tuathadea.net.

I share these with you because they make my life more enjoyable and hope they do the same for you.