The Amelia Project continues, and we recommend it.

We started listening to The Amelia Project in January of 2019 and thoroughly enjoyed it to the end of the second season the following November. Now, I am happy to tell you…YES…season three is coming.
This is a fun listen, with great guest performers in each episode. It is a comedy with the most outrageous scenarios, and can brighten your day in bite-size portions. 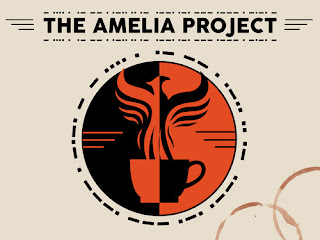 The Amelia crew has been locked down in several different countries because of this damn virus, which, of course, is problematic for production.
Recently, The Lockdown Tapes have appeared, with the individual characters from the story telling what they are doing during the lockdown.
The crew is a professional outfit with experienced and talented people in front of and behind the microphones, and they can tell you about the show and the team much better than I can. Here is an excerpt from the show’s press kit:

The Story
The Amelia Project is a secret organisation offering a very special service: Faking its clients' deaths! Its eccentric clientele includes cult leaders, criminals and politicians all desperate to disappear and start over... For how long can the secrecy last?
With the help of his indispensable assistant Alvina, The Amelia Project's Interviewer needs only a 20 minute consultation to help any troubled client disappear into a new and exotic life. His solutions are delivered with a flourish of ingenuity, style, and a mug of finest cocoa. But you don't get to be this good without attracting some unwanted attention…

The Amelia Project is an audio drama podcast by Imploding Fictions (NO/FR) produced in association with Open House Theatre (AT).
The Amelia Project was one of four Fiction Podcast finalists at Austin Film Festival 2017.
The show's 11 episode first season launched 1st December 2017. Episodes are released biweekly up until the beginning of May 2018.

Cast
Starring Alan Burgon as the Interviewer.
Featuring Julia C. Thorne as Alvina, Julia Morizawa as the voice on the answer phone, Gianluca Iumiento as Joey and
Ravdeep Singh Bajwa as Salvatore.

A Bit More About the Core Team
Philip Thorne
Philip is writer and director of The Amelia Project. He currently lives in Paris, France, and divides his time between writing, directing, dramaturging, translating and practicing magic. He is joint artistic director of Imploding Fictions.
http://philipwthorne.com/

Øystein Ulsberg Brager
Oystein is writer and director of The Amelia Project. Based in Oslo, Norway, he works as a freelance director, playwright and dramaturg. He is joint artistic director of Imploding Fictions.
https://oysteinbrager.com/

Fredrik Skaare Baden
Fredrik is our sound designer and composer. He trained at the Institute for Musical Sciences at the University of Oslo. He has previously composed music for theatres such as The Norwegian Opera and Ballet, Teater Innlandet, Nordland Teater, Centralteatret and the National Theatre of Korea.

Alan Burgon
Alan Burgon plays the Interviewer. He also directs episodes of The Amelia Project, and occasionally voices smaller characters. Alan is a freelance actor and director with a BA in acting from Royal Scottish Academy of Music and Drama. His film credits include The Leeward Side of the Moon, Thank You For Bombing and Grimm’s Snow White. His theatre credits include leading roles in productions such as Hedda, Twelfth Night, The Glass Menagerie and Romeo & Juliet. His directing credits include productions of The Importance of Being Earnest, Much Ado About Nothing and The Picture of Dorian Gray. He is also the creative director of Open House Theatre in Vienna.
https://alanburgon.com/

Julia C. Thorne
Julia plays Alvina and is the voice of the intro and outro credits. She also does project management for The Amelia Project. As a bilingual actress, she has worked in English and German theatre since graduating from drama school in Hamburg in 2010. Previous work includes: Carol in David Mamet's Oleanna at Theater  Lüneburg and Sheila Birling in J.B. Priestly's An Inspector Calls at the International Theatre in Vienna. In 2012, Julia co-founded Open House Theatre. She has appeared in many of the company's productions, including roles such as Juliet in Romeo and Juliet, Laura Wingfield in The Glass Menagerie and Tara in Hedda. She also works as the company's Educational Manager.
Anders N. Pedersen
Anders is the illustrator and graphic designer of The Amelia Project, and the man behind our awesome logo. He is a regular collaborator of Imploding Fictions, and has designed a number of our flyers and posters throughout the years. He is also the artist behind the comic strip Et øyeblikk, published in the Norwegian comic book Rutetid.
http://anderspedersen.no/

Posted by James Prescott at 1:40 PM